I have a confession to make, I've never been much a crock pot fan.  Gasp!  I know.  I love the whole "roll up your sleeves and get dirty in the kitchen" aspect of cooking dinner.  Also, 90% of meals I've had out of a crock pot taste like nothing.  By nothing I mean it just tastes like mush, all the flavors combining into one non-existent flavor rather than having layers of differing yumminess.  Don't get me wrong, I love slow cooking things, but over all I've never been a gung ho crock pot slow cooker person.  My husband is from the mid-west and was raised on a crock pot.  My mother in law has some recipes that I've tried and thought were good.  One Mexican chicken thing I'll more than likely share on here at some point because it's pretty darn tasty.

Somehow my children's lives have taken over my schedule. How did that happen? I mean, they're only 3 and 4 for cryin' out loud. The Nugget still naps from 1:30-4 every afternoon and the Munchkin is required to have "quiet time" during that period as well.  So I usually start dinner about the time they wake up while they run in the yard, play together, fight, cry, whatever.  Ha!  Honestly, I spend about 15% of the time cooking and 85% of the time refereeing those two.  Which is why I have to start cooking so early in the evening.  Anyhoo... Because of the naps our "activity hours" are somewhat limited.  The Munhckin's ballet class was every Monday from 5:30-6:15 during the school year.  Home by 6:30 if we're lucky... dinner?  Yeah, right.  Now it's summer and we're spending out mornings at the pool.  In order to enjoy the pool the kids have to know how to swim, right? So now we're into swim lessons 2 nights a week, 5-5:30.  Twenty minutes to get home.  How can I possibly avoid a fast food drive through, start dinner and actually feed this crew before everyone (me and Hubs included) completely loses it from hunger? Crock pot.  Yes, I said it.

Once again, I'll refer back to Pinterest.  Don't judge, it's a mild obsession for me.  Seriously, so many crock pot recipes to be found on there.  Including these geniuses who plan a whole month of freezer meals to be thrown into the crock pot or oven on a whim.  Say what?  It's true.  But that's not what I'm talking about today.  Today is about a roast.  A Mississippi roast.  Never heard of it? Neither had I.  But boy and I glad I stumbled upon it!! We've all had a pot roast at some point.  Dry onion soup mix, some water, some veggies, and some meat.  Tasty.  Nope.  Never again in this house.  Mississippi roast is the only one I'll ever serve again.  Flavor? Check.  Crunchy cooked outside? Check.  Fall apart tender inside? Check.  Healthy?  Ehhh... I'll worry about that later.  That stick of butter makes me nervous but it's not the end of the world.  So here it is, my pretties... 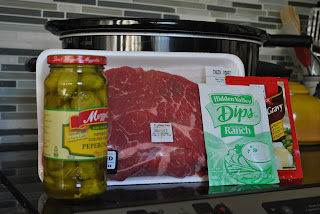 Grab your crock pot and throw in a roast.  I used a chuck roast because, I really don't know the difference and it was on sale at my grocery store.  This is about 4lbs. 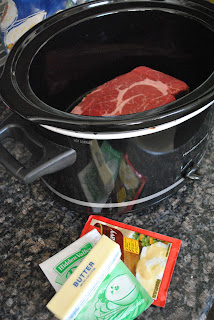 Sprinkle on a packet of Ranch dressing dry mix.  The original recipe I found called for the dressing mix but I had the dip mix so I used it. How different can they be?  Maybe the dip has more cornstarch to thicken it up a bit more. 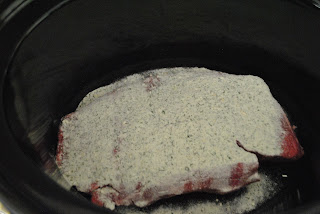 Then sprinkle on a packet of gravy mix.  I fudged it for convenience's sake again here.  The recipe called for an Au Jus mix but I had chicken gravy in my pantry.  I'm not a fan of spending an extra $2 if I've got a close substitute. 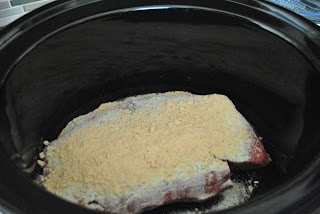 Ok friends... Now the yummy part.  Plop on a stick of butter and surround that puppy with some pepperoncini peppers right out of the jar. 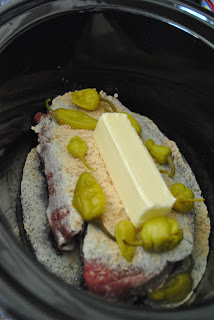 Looks good already, doesn't it? Pop the lid on and let it go on low for 8-10 hours.  No liquid necessary.  Come to think of it, that may be my problem with the crock pot in general... add too much liquid and the meat just boils.  No texture, no yummy brown bits.  You can see below (from the 2 bites that were leftover since my family got to eating before I could take a picture of the finished product) the brown goodness on top.  That is flavor right there, boys and girls!  Serve this up with some roasted broccoli and mashed potatoes and I guarantee you will have some happy tummies. 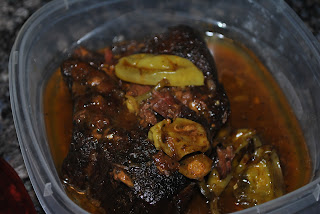 All kidding aside, we're gooing to have days that are packed to the gills.  And I know, as the littles get older the days will get fuller and I'll hit a period where cooking at "dinner" time will be nothing more than a day dream while sitting at a stop light between drop-offs.  Thank heavens for the crock pot for days like that.

Put roast in crock pot.  Sprinkle ranch mix and gravy mix on top.  Add butter and place the peppers around it on top of the meat.  Cook on low 8-10 hours.
Posted by cth at 4:34 PM